September 11, 2018. The stupid face navigation worked very well, we passed thousands of steel shells and we learned in the monastery how to drink red wine from a small plastic bottle.

Lulled by the sound of the Atlantic Ocean we slept well and for a long time. Unfortunately, due to the morning dew the freshly but too late washed clothes and also the tarp were still soaking wet. This circumstance pressed our motivation to hurry up, especially I didn’t really come out of the curd (German proverb for low activity level) without knowing exactly why.

So Katrin had finished her extremely practical tent a long time ago and in her tent the quite understandable thought matured to have a coffee in Orio. She inspected once again exactly the tree standing on our camping ground – which we had misused as a clothes rack – so that Vasek and I could not get into the embarrassment of having to fasten a wet bra outside the backpack. Then she moved from there towards her alkaloid-containing hot drink.

After a little while we left and because of a closed bridge we had to pass through Orio and walk over a bridge of the national road further away. But also in Orio the “stupid face navigation” worked out very well. As a pilgrim you just stand at a street corner, look around and make a stupid face. In this case, too, a passer-by helped relatively quickly by saying “Camino” and pointing in the right direction with her naked index finger.

The morning sun warmed up the asphalt quite a bit. And until we reached the Gran Camping before Zarautz, our plan B goal of the day before, we had already done quite a lot of altitude meters on asphalted roads, drank a lot of water and tried to get some extra energy with some more Czech apples. At the water point at the entrance of the campground we were glad to have stayed in Orio, it didn’t look so inviting here and it was also a good distance from the Atlantic beach.

We descended to Zarautz and quickly left the village behind us to walk on the promenade next to the national road to Getaria to find something to eat.

It was a stretch of noise, on the left the traffic was roaring, on the right the sea. On this day the weather was once again fantastic and the sea shone in a wonderful blue tone.

According to the Camino, the railing on the promenade was in shell design. So it was pretty clear that this was the right way. A group of pilgrims who walked in front of us in some distance thought the same, but due to our drinking breaks at the water points we could not catch up with them and actually did not want to. A few days later we met them in a hostel and got to know them not from their best side.

The plan with having food in Getaria fell through. We had the hope not to have to search inside the village but to find a bar with delicious pintxos along the Camino. But the place was much smaller than we thought and so we got out of there faster than we had planned before.

So we climbed up to Askizu a bit hungry. Vasek made some more Czech apples from his Mary Poppins bag and I added some nuts.

The way to Zumaia offered a number of beautiful panoramas. The horizon merged with the sky and showed an unbelievably deep blue. Meanwhile we had it again far beyond 30 degrees, but were spoiled by a light wind from the Atlantic.

Finally, we descended from the cliffs to Zumaia and found a signpost to a beach at the entrance of the village. Here we immediately planned to dry our tarp there and moisten our overheated bodies with Atlantic water. But first of all we had to clear the place for the night. At the harbour of Zumaia we sat down on a bench opposite a Norwegian ship, watched the bathing children and checked the opportunities of accommodation.

From the ship there were quite loud howling noises coming from some kind of aggregate. Almost as if the barge had been homesick for the cool fjords of Norway and was moaning anything but quiet.

Since it was still relatively early, we could not yet enter the hostel, the former monastery San Jose. But it was good that we had read the information in the pilgrim guide carefully, because the entrance was really not easy to find. Later we talked to other pilgrims and some walked past this hostel, although they originally wanted to stay here.

We took advantage of the remaining hour until the opening and looked for a good restaurant in the centre. We had a slow cooked pork fillet, a salad with fried salmon and a local Basque fish dish rounded off with a delicious Rosato from Navarre, which had delicious and fresh strawberry flavours, we really enjoyed ourselves. We were not the only gourmets in this restaurant, but I was at least the only one with a bright yellow functional t-shirt and yolk yellow bandana.

Shortly after 3:00 p.m. we arrived back at the hostel and were welcomed there by Katrin, who had appeared there shortly before.

Vasek and I were assigned a double room, which had probably once been the cell of a monk. The monastery was furnished in a rustic way. In the corridors there were still some prayer chairs and numerous pictures of the Virgin Mary hung on the wall.

The floor and the doors were made of dark woods that had been in use for several hundred years. Accordingly, we planned not to break anything here.

This hostel is really worth a recommendation, especially if you want to experience a really rustic pilgrim feeling without being accommodated in a dormitory.

With my two walking sticks we built a Lean-To-Shelter with the still wet tarp, which bravely and strenuously braced itself against the wind from the Atlantic and pulled at the red tent pegs.

Alternately we threw ourselves into the foaming floods, which were not completely without a certain challenge due to some waves coming in at an angle, and enjoyed the shade under the tarp, which had basically already dried during the construction.

The beach was very large, there was plenty of room for everyone and the tarp was as inconspicuous as a clown at a funeral, but still a Spaniard managed to stumble over a tent line, pull one of the pegs and tear down our airy structure. We took this and his for us incomprehensible bleating as a sign for departure and did not stay long on the beach. Due to the rising tide we had to look for another way back and scared a cuddly couple.

We stocked up with provisions in an Eroski market near the hostel. A nice cool drinking yoghurt I rushed down immediately.

Back at the hostel we quickly cleaned our sand covered bodies and clothes and hung everything up in a kind of greenhouse with a built-in washstand.

Afterwards we sat down with Katrin and her conversation partner Jenny, a German athlete who had walked here from San Sebastian that day. Again and again she filled a drinking portion of her red Rioja into a small plastic bottle from which she drank. A certain part of this noble drop also went to a Spanish group at the neighboring table, who spoiled us with homemade Tappas.

Punctually at 10:00 p.m. we were friendly but determinedly expelled from the terrace by the hospitaleros and then we quickly fell into bed, although the place reminded me a little of Umberto Eco’s “The Name of the Rose” that was partly filmed close to my hometown. But since assassinating monks stayed away in the further course, we soon fell asleep.

Conclusion of the day: Sometimes the Camino can be decadent, especially when it comes to a Rosato from Navarra. 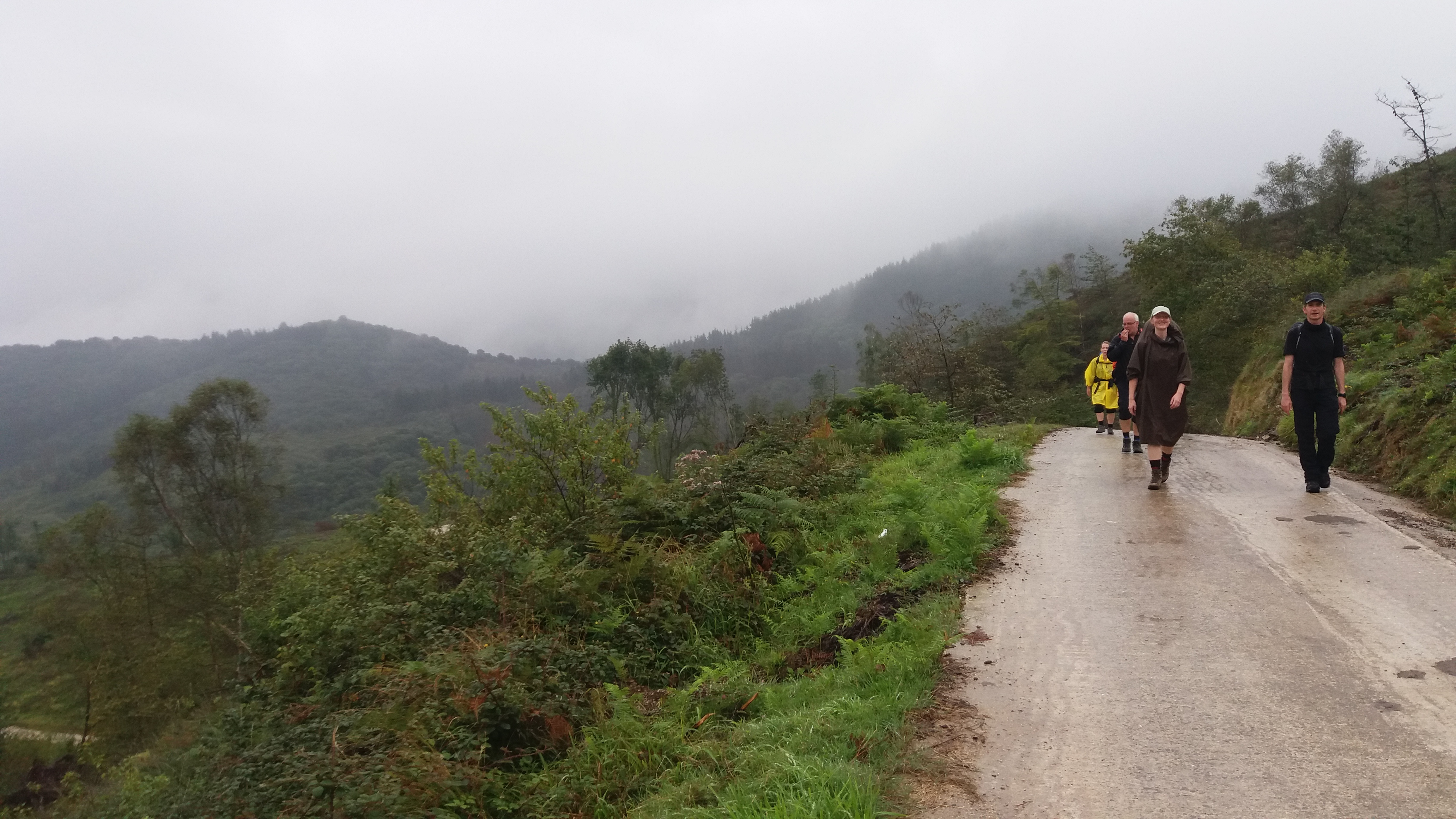 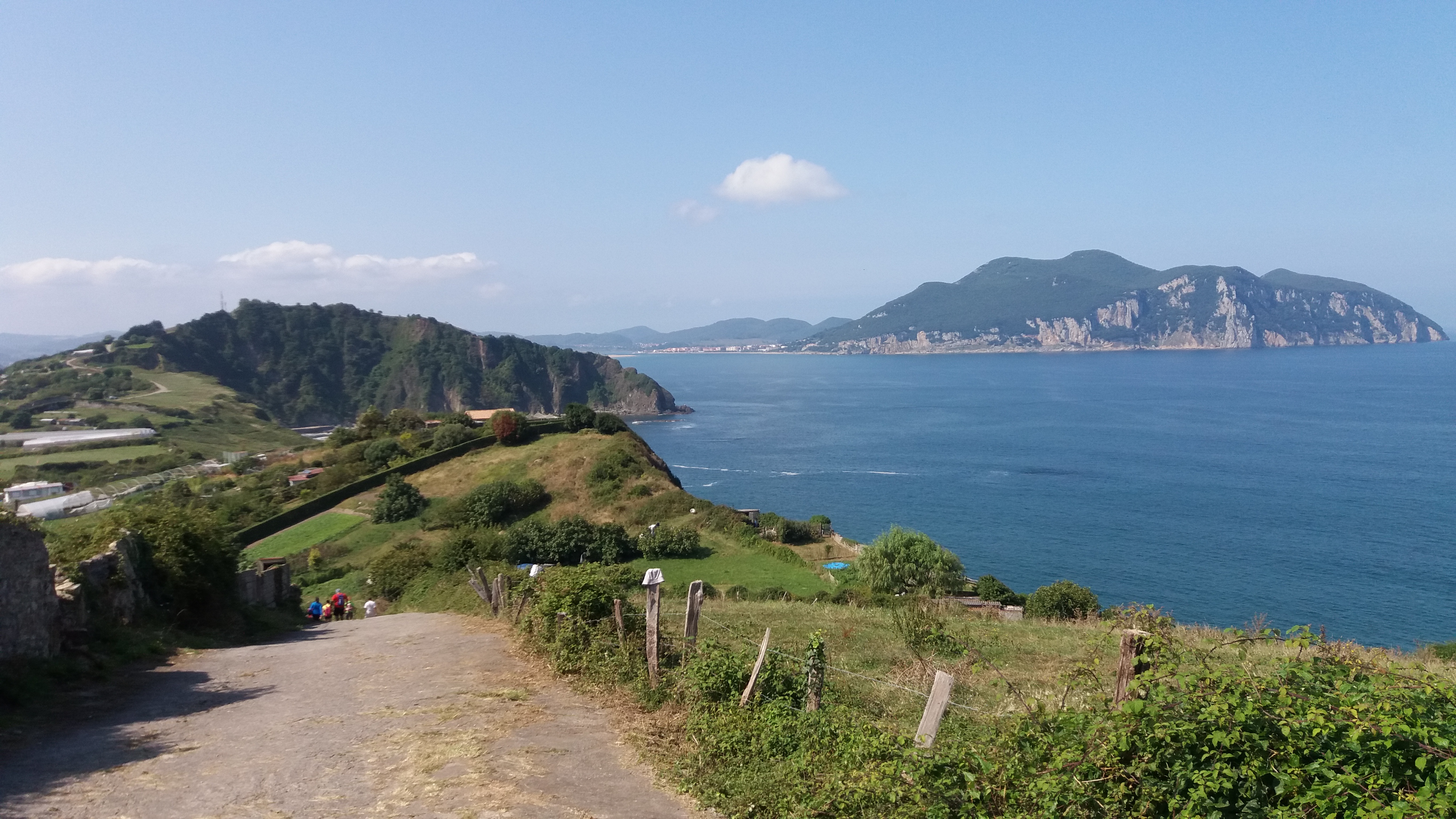 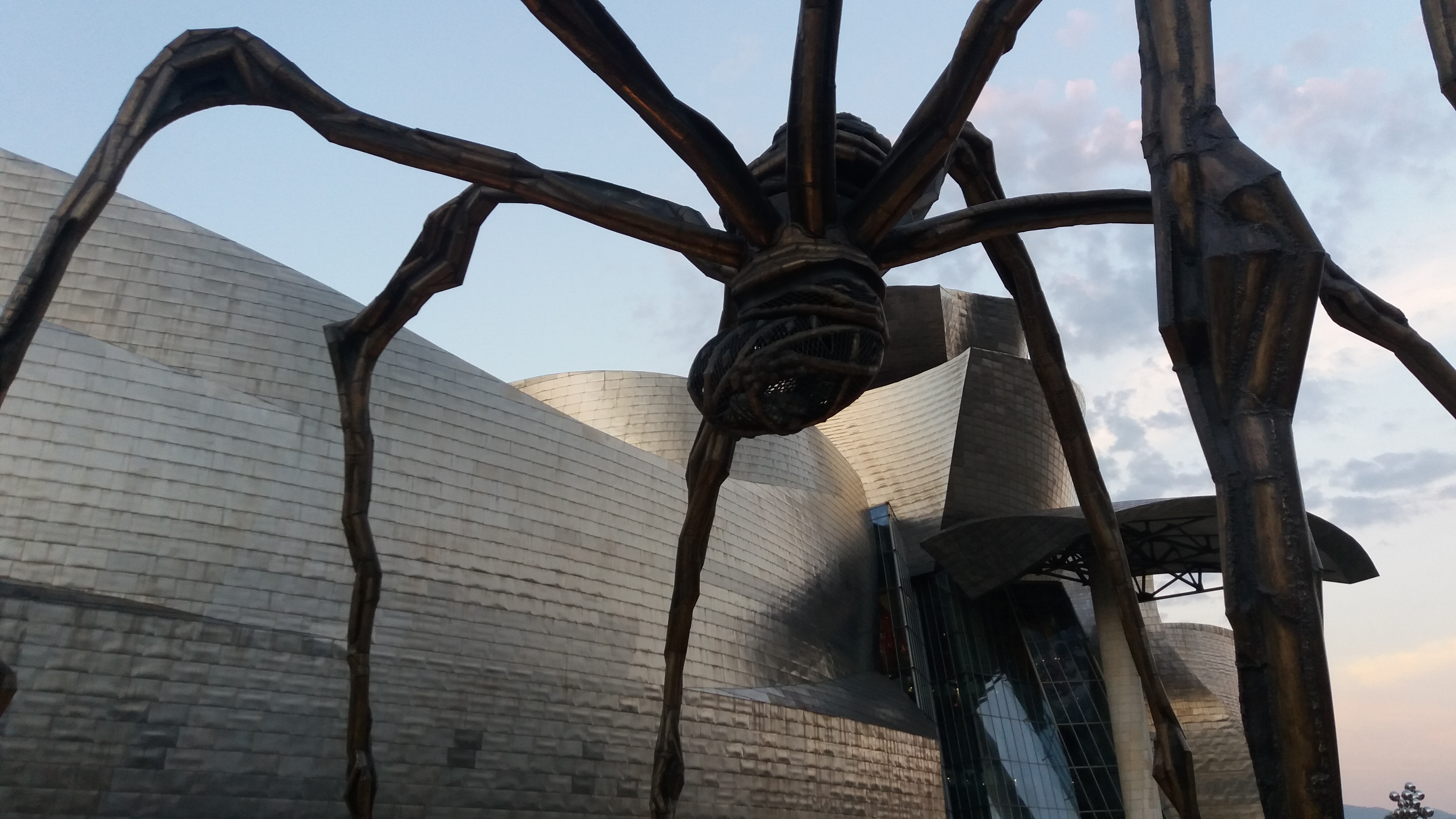