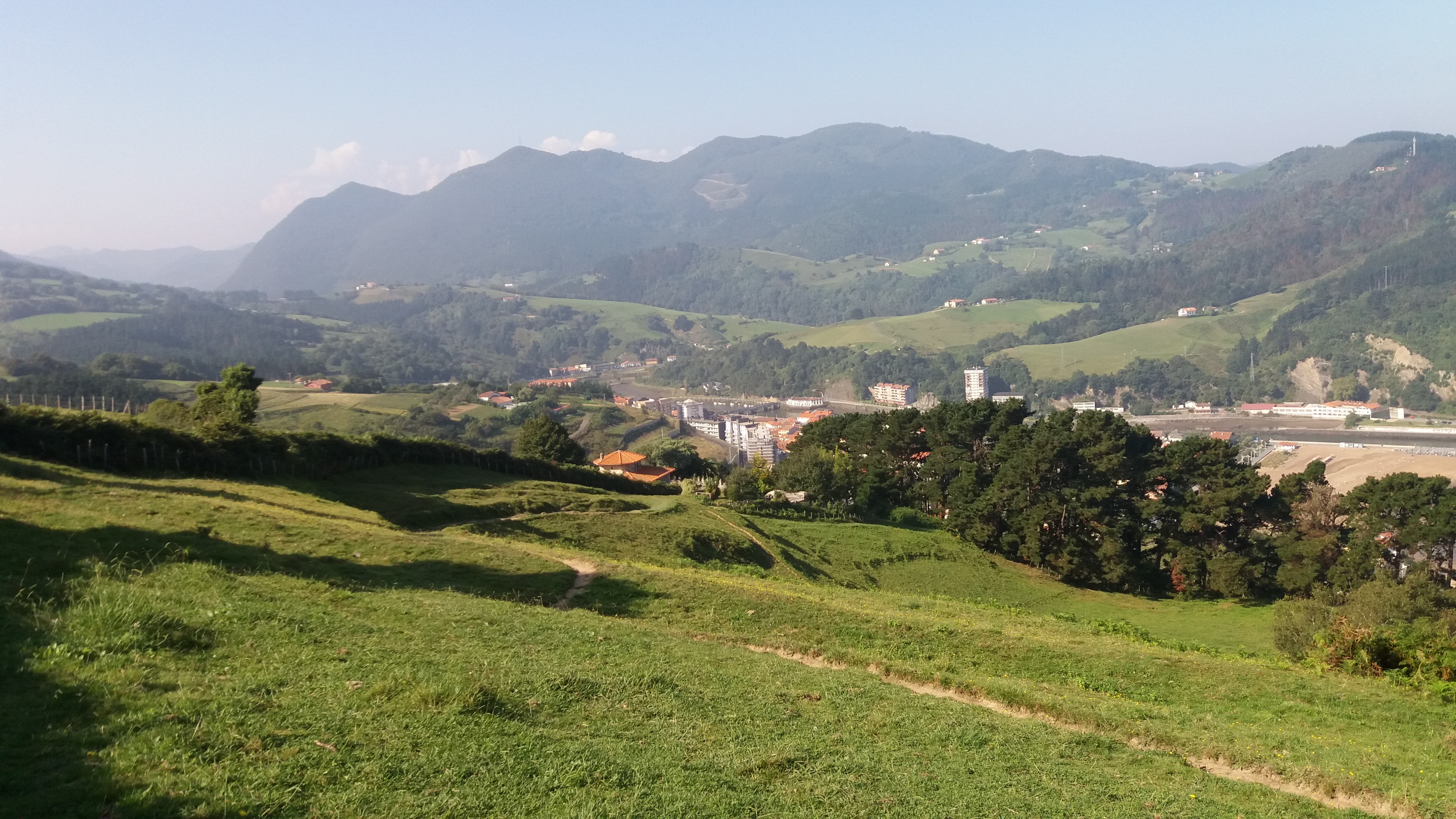 September 14, 2018: We saw another sign of life from Katrin in the monastery, did not understand the purpose of the ox arena, met the mystic giggling Korean again, defeated our desire to kill Stijn, and yet we were able to end the evening on the terrace of the hostel with a nice evening with wine.

After a wonderfully sleepy night in the narrow but well-equipped hostel, the smell of the cowboy coffee, which the two Australians had brewed together with some coffee from some corner of the kitchen, beckoned. But on closer inspection I was not impressed by the muddy consistency of the brew, and so a few sips of water did.

The coffee cooks Peter and Nico, who were now less qualified in my strict eye, pulled us ahead and we saw them for a short while at the Zanavazza monastery where a mass was taking place. We heard the chants of the monks from outside, perhaps some of the pilgrims’ voices had also crept in. In the monastery it is desired, if one stays there overnight, to participate in the masses.

Katrin, who had fought her way up to here, seemed to be one of them. We did not see her, but her empty tent stood on the lawn in front of the modern extension, which was probably intended for the pilgrim accommodation. Hannah still dared to doubt my expertise that this had to be Katrin’s tent, but I told her that I had already inspected this 20D Ripstop Silnylon Tarp Tent from the USA very carefully.

So without waiting for Katrin we went on with Stijn and Hannah as a Dutch-Czech-German quartet. My thoughts of saying goodbye and not being able to say goodbye to the previous day came back to me and I shared these thoughts with Hannah on the further way. She works in a clinic where she looks after addicts and is really a very good listener.

The four of us had already gotten used to each other, phases of the partly deep conversations alternated with phases of silence or even one or the other teasing, without this feeling strange to me, and probably not to the others either.

In the morning, there was still some light rain, rather a fresh basque drizzle, for which we did not take out our ponchos and rain jackets, but still put the overcoats over the backpacks. Thereby, we put some colourful spots into the grey milieu.

We passed through a few villages where the fight for the independence of the Basque Country was particularly noticeable. It was not so long ago that a few Basque youths were charged with terrorism and sentenced to long prison terms because of a pub crawl with two Civil Guard members off duty. Throughout the Basque Country I have not seen a single Spanish flag on private homes, only the Basque flag and the two variants of the Catalan Estelada of the left-wing and liberal separatists.

After some time we met the Australians again, in a building whose purpose we could not explain at all. It was a kind of small hall without walls, but with cobblestones on the floor. At a longer side there were stone steps like a grandstand. Within the covered area there was a concrete block of 2000 kg with steel brackets on the sides, so that one could attach ropes to it. Only later did I learn that this building was used for competitions in ox-drawing, where different teams of oxen from the local farmers had to draw the stone as far as possible in a certain time.

For us, however, the watering place at this building was more important and we settled down on the tiers to munch carrots and nibble nuts together. We reaped astonished looks of some Spanish pilgrims who passed by at high speed. But a friendly “Buen Camino” was still sounding on both sides.

Peter and Nico attached themselves to a sporty German and continued at a remarkable speed. So there were four of us again. We went through a beautiful forest landscape, which partly and in places reminded a little bit of the Sauerland. Right in the middle we found this sweet spot:

Our next longer break we made at a (of course closed again) church, which had a water place where we could refresh ourselves. While we recovered a little bit we first met an Argentinean pilgrim, whom we saw again later almost only with a cigarette in her face. She had a hairstyle like Diego Armando Maradonna and wore a huge skin-colored knee bandage that day. With my knee problems I also had the idea to get one, but it didn’t work out.

Especially funny was the funny Korean we met the day before in Markina-Xemein. Here, behind Marmiz, he told us with a giggle that he had got lost twice already. (In principle, he had almost doubled his stage that day, because he was running a longer distance back just before the finish). But apparently he found his way, because we met him again later in the hostel in Gernika.

But until we arrived there, we had a not so small odyssey. Stijn had seen another hostel next to the youth hostel in his Dutch guide (which was the translated red guide of Rother) and wanted to lead us there. At the railway crossing in Gernika we met Peter and Nico again, who we integrated into our search party.

So we also passed the famous picture of Picasso:

This picture has a special meaning for me because I studied at the Ruhr-University in Bochum. In the 1980s, a small group of students there had painted this picture on an empty wall of the central library in a cloak-and-dagger action without the agreement of the university management. It was still there when I signed in at the beginning of the 90s in Bochum in the secretary’s office opposite this picture. So it was one of my first impressions of my alma mater and it accompanied me throughout my entire time at university. Later an extension was to be built at the place where this picture was painted. The university management decided to have the picture rebuilt on another wall. I was very pleased with this decision at the time. I can only recommend to take a look at the history of Guernika and the German legion Condor in the Spanish civil war.

The arc from warlike atrocities to the leadership of Stijn through half of Gernika over several steep ascents and descents to a closed hostel was not far. Stijn had simply overlooked the small remark that the school hostel was only open in August. Now he was afraid of our dark violent desires, but we swallowed our anger and walked back along the track.

In the hostel we could check in all six of us in a common room. This cost 18,- Euro per person including breakfast. With us in the room was an American woman from the Alaska group, but she belonged to the non-snoring minority, and a Spanish couple. When we moved into the room, she just got a back massage from him. But there were no further conversations with the three of them, apparently they had also noticed that we were already a tightly welded bunch.

After taking a shower and doing the laundry (in the latter I helped the Alaskan super-snorer to operate the washing machine) we went on sightseeing to Gernika to see the historic oak tree where the Basque Prime Minister always has to take his oath of office.

The Australians did not make a killer pit out of their hearts (German proverb for saying something frankly) at this sight and shouted out loud: “Hey, it’s only a log!” In view of the thick wooden truncheon under a canopy they did not develop any devotional mood. No cold shivers ran down my spine.

In short, it was time to take care of more important things. On the way back we passed a supermarket and stocked up on wine, snacks and fresh fruit. Afterwards we looked for a restaurant again as a quartet. Personally I was not in the mood for an opulent meal and the further overloading of my daily budget and left it with a diet coke. But the others had a pilgrims’ meal for 12 Euro.

Back in the hostel we gathered six of us plus the Catalan from Barcelona, who had slept in the bed next to me in Bolibar, around a table to annihilate appropriately the three delicious bottles of red wine.

We drank from glass teacups that were actually intended for breakfast and were not disturbed by any etiquette or the hordes of children that suddenly populated the terrace and had to be provided with food.

As everybody was pretty much tucked in, it was a funny evening, the last one where we saw the two Australians. They wanted to finish their Camino in Bilbao the next day and left relatively early.

Conclusion of the day: Wrong ways can sometimes lead to the right destination in the end.